Whence comes the boom in economic development – and why does it tend to eventually turn into a bust? Recessions like the Great Depression (1930s) and the Great Recession (2008) have frequently been pointed to as central flaws in a market free economy. Without showing direct causal relationships, deregulation is claimed to be the great villain. The market must be restricted, it is proclaimed, because otherwise its powers will expand, people will be exploited and when the downturn comes it will go worst out on the poorest. The Austrian School of Economics (ASE) challenges this viewpoint and tries to illustrate why perceived market failures are often either not failures at all, or that it’s the State who’s their ultimate cause. The school’s theory of the business cycle is a central part of the ASE because the business cycle is such an important concept to understand economic development and that many economic policies are based upon this tendency.

So, how do followers of the ASE explain the business cycle? Five words: Federal Reserve controls interest rates. The Federal Reserve is the central bank of the United States and was established in 1913. There are many things the Fed can do with the role as a central bank (Details: Ch. 10 in MRU’s Macroeconomics course), but in the explanation of the business cycle it’s most important to understand that it controls interest rates and what that entails. In a free market, the interest rate would be set based on supply and demand of loanable funds – the equilibrium of the amount of money up for loan and the amount of loans demanded.

For the interest rate to go down in a market free economy, therefore, the population must either increase their savings, or decrease their demand for loans. The former tends to be more likely. If the population saves more, interest rates will go down and investors will be encouraged to start long term projects as it’s cheaper to borrow.

What happens when the Federal Reserve sets price controls on the interest rates then? The Fed tends to set the federal funds rate (interest rates between banks, which to a large degree also determine other interest rates) below the equilibrium, creating a shortage of loanable funds (the demand exceeds the supply). When interest rates are set artificially low like this, it tends to encourage investments into the stock and real estate markets, whose assets’s value consequently increases more than they would otherwise (higher than their “intrinsic value” or “opportunity cost”). But, you may ask, how is it possible for this to go on despite the obvious shortage of loanable funds? The answer tends to be inflation. In addition to setting price controls on the federal funds rate, the Fed also takes the role of printing new money. When there’s a lack of loanable funds, they can just print more money. This creates additional problems in that inflation works as a tax on savings (the value of the money saved decreases over time). As the value of the assets increase artificially as a result of the cheap credit from the low interest rates, an economic bubble emerges, which must necessarily pop at one point.

As Robert Heinlein has pointed out, “there ain’t no such thing as a free lunch.” That is, with almost everything, there are tradeoffs in that you must give up one thing to have another. Such is it too with artificially low interest rates. You can earn big money on borrowing money cheaply and throwing them into a prosperous stock market. One could see this especially in the 1920s running up to the Great Depression, as the general public also started becoming more engaged in the stock market through cheap credit. When the crash came, a lot of people lost everything they owned, as they increasingly had to put up more in collateral. In the Great Depression, the stock market was the bubble; in the Great Recession, it was the mortgage market.

As the Austrian economist Ludwig von Mises – who predicted the Great Depression – wrote in 1934,

[…] the inevitable and ineluctable consequence of the expansion of credit … was bound to lead eventually to a collapse. And the thing which is chiefly advocated as a remedy is nothing but another expansion of credit, such as certainly might lead to a transitory boom, but would be bound to end in a correspondingly severer crisis.

Conclusion: When the central bank sets price controls on loanable funds, the market becomes unable to regulate itself as the interest rates cannot naturally adjust to the increased demand, leading to an indefinite continuation of the business cycle.

This summary may clarify the theory further:

For further reflection: May the biggest recession yet be ahead? A Bear Market Is Already Here for Most Major Global Stocks 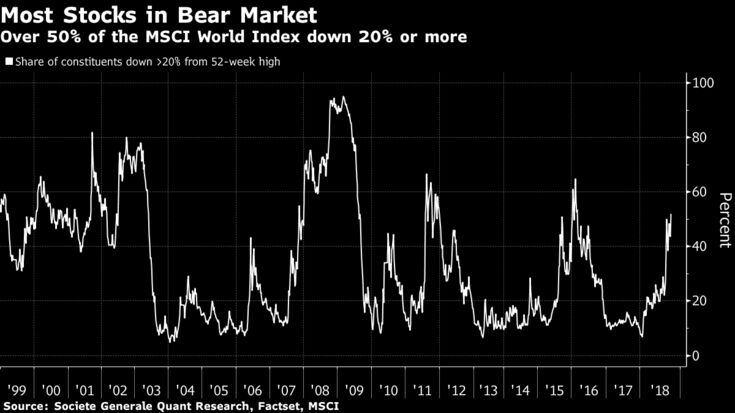 An audience with the OECD’s chief economist: It’s time to prepare for the worst

The problem we face is that the world economy may be less equipped to deal with a serious downturn than it was before the financial crisis, and it wouldn’t be as easy to act as it was back in 2008.

Yellen warns of another potential financial crisis: ‘Gigantic holes in the system’

Stefan M. Kløvning is a former journalist for the British alternative media site Goldfire Media and now writes regularly on his personal blog MisesRevived.net about various topics of interest, including political, economic, and philosophical questions. Stefan is also the author of “Vaccines as Weapons Against Us”, host of the educational channel “The Praxeological Academy” (https://www.youtube.com/channel/UCuZivdr9gthajs0mKuLPEDw) on YouTube, Vimeo, and Bitchute, and founder of the site The Anarchist Perspective. View all posts by Stefan M. Kløvning

One thought on “The Austrian Theory of the Business Cycle”